If Larry Saur’s parents didn’t take him to the city band concerts as a child, he rode his bike.

The kids would dare each other to ride a trail right where the director was conducting in front of the band shell, he recalled.

“They still do,” said Sue Anderson.

“We’ve had some distractions,” added Alan Anderson (no relation). “Did your folks let you play on the cannon when you were a kid?”

The three longtime members of the Two Harbors City Band reminisced recently about the parents, siblings, nieces and more who preceded them, or followed in their footsteps, performing in the Paul Gauche Memorial Band Shell in Thomas Owens Park.

The three are part of the ongoing effort to update the venue, which was built in 1937.

Two Harbors Paul Gauche Memorial Bandshell sits closed up in Thomas Owens Park on Monday, May 17, 2021. The group Friends of the Bandshell Park is exploring ways to enhance the park and the bandshell. (Steve Kuchera / skuchera@duluthnews.com)

“It was a good building, but it sure served its purpose, and it’s not up to snuff now,” Alan said.

“That was a hard fact for me … but looking ahead, it was inevitable,” added Sue.

It’s currently the main performance space for the city band, which dates to 1897, but in recent years, it has become home to farmers’ markets, chalk art, church services, dance recitals, guest band concerts and more.

The new vision is to replace the band shell with an all-encompassing performing arts center and to restore Thomas Owens Park to create a town square.

This is what it once was when they were children and what they intend it to be again in the future, Alan said.

An artist’s rendering pictures the proposed Performing Arts Center, which includes an updated Paul Gauche Memorial Band Shell and park area in Two Harbors. Fundraising efforts are at almost at $2 million of a $4 million goal. (Photo courtesy of Pope Architects)

They imagine a central gathering space for Two Harbors.

This new performing arts center and park area is expected to be a resource for the North Shore arts community and Minnesota tourism, said fundraiser Monica Bruning by email.

Fundraising efforts have been underway for about 12 years, but they started tackling it more aggressively five years ago. They’ve raised just short of $2 million so far, from various donors CN Railroad, Minnesota Power, Co-op Light, and are halfway there.

Friends of the Band Shell Park formed three years ago to help fundraising efforts. It quickly morphed from a Two Harbors City Band project into a community project, the organizers said.

Their website features video testimonials from Mayor Chris Swanson and Janelle Jones, the president of the Two Harbors Area Chamber of Commerce — both speaking about the importance of this effort.

“Thomas Owens Park has been a great place for community pride in our town. … A new band shell and park renovations are going to give our community the opportunity to build off of what is already happening,” Jones says in the video. 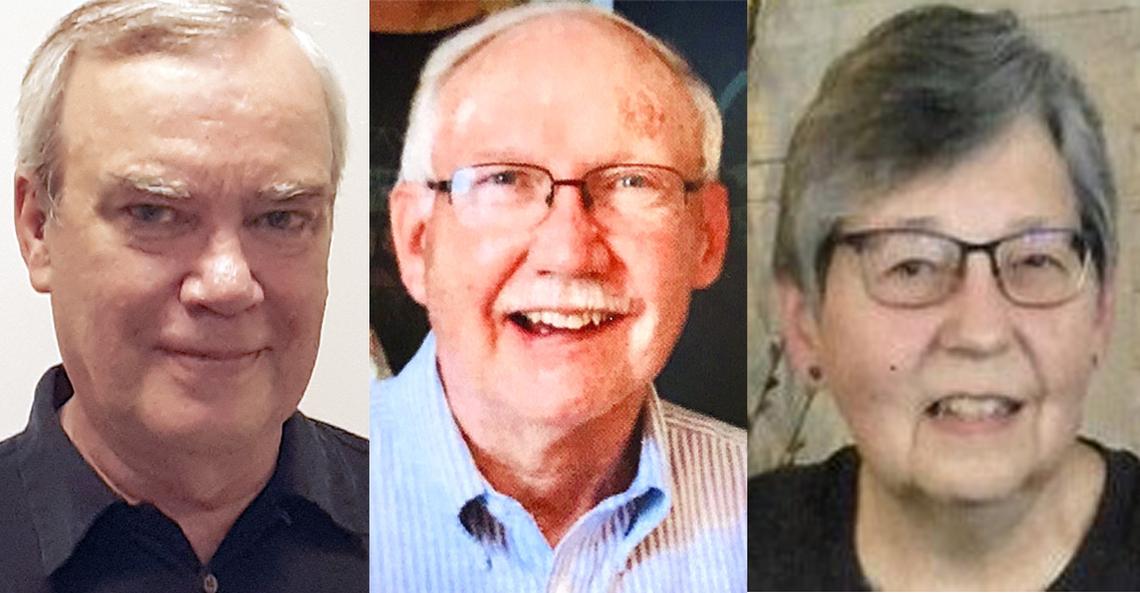 This all began because the city band needed a space to house its instruments, uniforms and music library — all are currently stored in a rotating combination of City Hall, in personal homes or various rehearsal spaces. They also require a space that is ADA compliant, which the current band shell is not. And the band shell is past its prime.

There’s a single, very difficult stairwell that goes into a basement area that’s prone to flooding, and a restroom without a doorknob — among other things. As the band shell opened up to more performances the past 10-15 years, community organizers realized they needed to meet the needs of a wider variety of users.

The new performing arts center will be open year-round, with indoor space for art displays, rehearsals, an office or maybe a tenant.

Larry, Sue and Alan reflected about the different visitors they’ve had in the band. The band shell and the park have a rich history of bringing people together from all around the globe and even into matrimony.

Rachel and Scott Gischia met while playing together in the Two Harbors City Band. “Not the place we dreamed of meeting our perfect match, but yes the city band brought us together and we’re proud,” she said by email. Scott and Rachel Gischia were band mates before they were spouses.

“Not the place we dreamed of meeting our perfect match, but yes the city band brought us together, and we’re proud,” Scott said by email.

Rachel grew up going to concerts at the venue, and Scott was introduced to all of it when he moved to Minnesota for work in 1997. The Gischias have performed in the Twin Ports Wind Orchestra, the Negaunee city band, and as accompaniment to the Superior Sounds choral group.

They said the band shell and the city band have a long legacy in Two Harbors, and they are a testament to how music can bring together many people of different generations and skill levels.

They won’t be performing in upcoming shows this year, but they have designs on rejoining with their daughter, who will be taking over the flute, and their son, “the budding percussionist.”

“It’s one of the great things about the organization is that it’s always welcoming of both new and returning players,” Scott said by email.

Amy Taylor is one of the returning players. The music teacher and semi-professional musician of New Forest, England, reached out to the city band before a visit to her in-laws’ Two Harbors cabin.

“They were really excited I play an exotic instrument,” she recalled of her first interaction.

Among how inviting everyone was, Taylor recalled a former conductor named Betty, Minnesota mosquitoes and her very accommodating French horn cohorts.

The following year, she played in the city band with her children. And one year, she wasn’t able to return, Taylor reported the band members were so inclusive, they Photoshopped her into a group picture.