Friends of the Band Shell Park

The Friends of the Band Shell Park (FOBSP) held a community informational meeting Thursday, May 2, 2013 at the Two Harbors Community Center with 45 community members attending which included 10 members of the FOBSP Board of Directors.

Here is the video of public meeting:

Alan Anderson, President of the FOBSP, introduced the members of the Board and Okey Ukaga of the Northeast MN Sustainable Development Partnership which funded the conceptual design for the renovation of the Band Shell Park. After Mr. Anderson’s brief remarks, Two Harbors Mayor Randy Bolen was introduced and spoke about the importance of citizen initiative on community projects. He also commented that he was impressed by the work of the FOBSP Board and thanked the Board for their hard work.

Larry Saur, Board Member, played a short video giving a history of the 116 year old Two Harbors City Band from its inception to today, including information about the revitalization project currently underway. He also reported on the recent appraisal of the band’s music, which contains 1376 compositions and is estimated to be worth $98,000.

Kane Tewes, an architect with Krech Ojard & Associates, presented and described the architectural design and the process of developing the Band Shell Park renovation. Besides creating a new band shell for summer concerts by the Two Harbors City Band he described the indoor rehearsal space which could be used year round as a multi-use area for meetings, ensemble concerts, lecture series, theatre productions and other activities. Public restrooms and ADA accessibility concerns were also commented on by Mr. Tewes.

Alan Anderson talked about the funding of this approximately $3 million project. He stressed the importance of community support which is the basic building block for the funding along with businesses and small organizations. Larger contributors and foundations need to see local support of a project before they will commit their dollars to it. Research has been done on many foundations and a grants plan is ready to execute, along with other Capital Campaign fundraisers.

The final portion of the program was a community input forum moderated by FOBSP director, Ken Sandvik. Many long time and newer residents spoke of their concerns, questions and ideas. These included a new resident of Two Harbors who indicated one of the main reasons for relocating to Two Harbors was the weekly band concerts held in the Band Shell Park. Long time residents spoke of how much they appreciated the work of the FOBSP Board of Directors who have devoted 3-5 years of monthly meetings in designing this renovation of their city park.

Will the building have a flat roof?
No, it will be sloped and done according to current architectural standards.

Will there be space inside for offices for non-profit groups other than the city band?
No, that is not its purpose and the city band is affiliated with the City of Two Harbors.

Is it possible to purchase the rental house adjacent to the park to increase the size of the park?
That question has come up and is being considered.

Could you stake out the footprint of the new building this summer so people could get a feel for its size?
That is an excellent idea.

What is the plan for the existing shell?
That is under discussion. If anyone would like to move it elsewhere they should talk to the city.

Is there a plan for a city referendum on this?
No, as the goal of the Board is to build this building with no public monies.

Will there be an arched shell like the lovely one we have?
Yes, one designed by an acoustical engineer for optimum sound quality.

Have you raised any money yet?
Yes we have raised several thousand dollars in the last three years without a conceptual design. We also have some funders who have promised grants or donations, but are waiting to make sure of City Council and community support. Foundation grants have been researched and we are planning our Capital Campaign. But before we go further we need a resolution from the City Council to proceed.

In a straw poll, the vast majority of the attendees were in support of the conceptual renovation plan. Five of the seven Two Harbors City Councilors were in attendance at the meeting and had some questions, but also voiced their strong support of the project. One of them pointed out that the vision of the City Council is to make Two Harbors a destination and this project would go a long way to making that dream a reality.

The FOBSP Directors stressed that the committee would not disband once the building is built but would continue as a fundraising group for the betterment of the Band Shell Park and the Paul Gauche Performing Arts Center (proposed name).

Al Anderson closed the meeting with remarks. He is excited about this project and foresees it bringing many events, groups and people to Two Harbors. It is a legacy project for our children and grandchildren and beyond.

If you could not attend the meeting you can view the plans and make comments on the FOBSP website (www.friendsofthebandshellpark.com) and Facebook page (www.facebook.com/pages/Friends-of-the-Band-Shell-Park). You can also call John Gregor, Architectural Subcommittee Chair at 218-830-0767 or Al Anderson, President of the Board of Directors at 218-834-9526.

The Friends of the Band Shell Park (FOBSP) is a local non-profit that has been working for over 4 years on a project to rebuild the Paul Gauche Band Shell in Thomas Owens Park, Two Harbors, MN. In 2012 they received a grant from the Northeast Minnesota Sustainable Development Partnership (NMSDP) for assessment and planning purposes. The NMSDP is part of the Extension office of the University of Minnesota and partners with area groups to share the resources of the university with local communities. The Two Harbors City Council gave permission to the FOBSP to pursue assessment and planning for the park. The Architectural firm Krech Ojard & Associates was hired to do the preliminary design.

The FOBSP is inviting the public to come and view the preliminary design for the proposed Paul Gauche Performing Arts Center and the proposed redesigned Thomas Owen Park. After the presentation there will be a question and comment period where the public can contribute their ideas. The meeting will be held Thursday, May 2nd at 6:30PM at the Two Harbors Community Center, 417 South Ave, Two Harbors MN.

If you cannot intend the meeting you can also view the plans and make comments on the FOBSP website (www.friendsofthebandshellpark.com) in the News section and Facebook page (www.facebook.com/pages/Friends-of-the-Band-Shell-Park). You can also call John Gregor, Architectural Subcommittee Chair at ( 218) 830-0767 or Al Anderson, President of the Board of Directors at (218) 834-9526.

Here are the conceptual images of the proposed Paul Gauche Performing Arts Center and the proposed redesigned Thomas Owen Park: 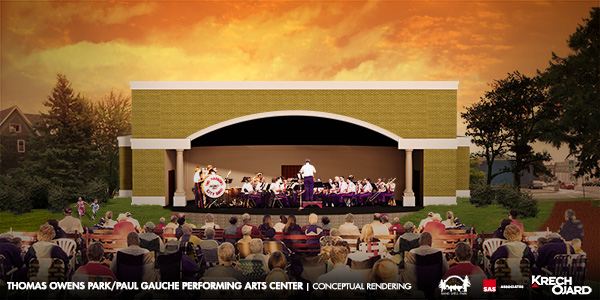 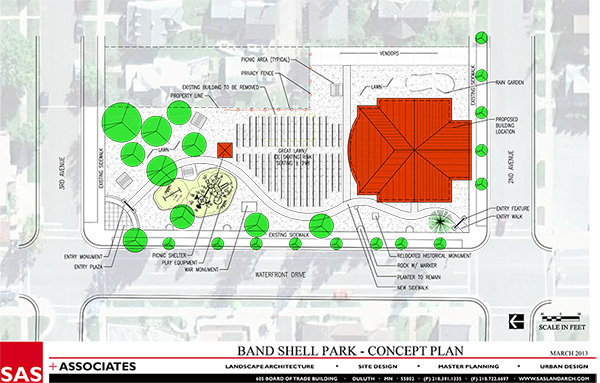 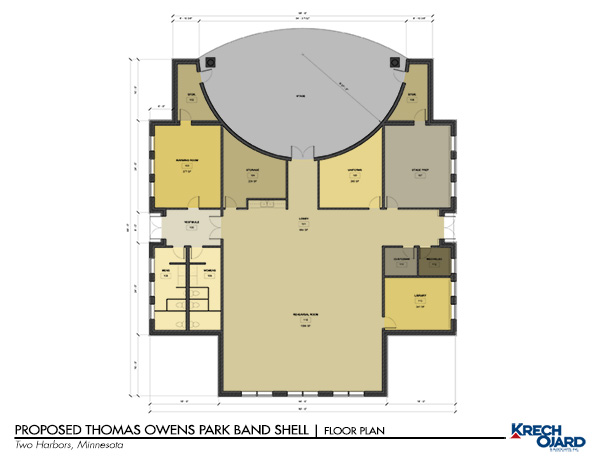 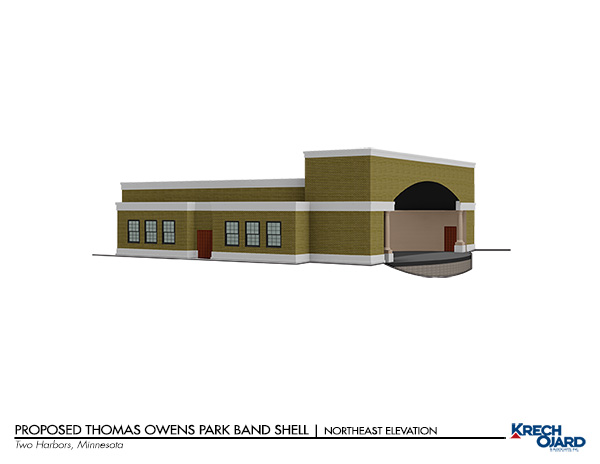 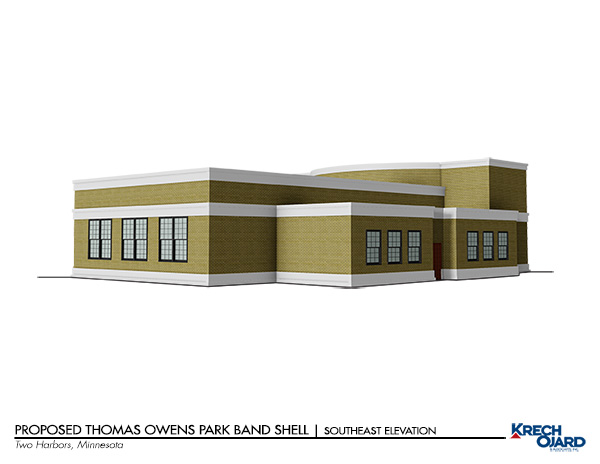 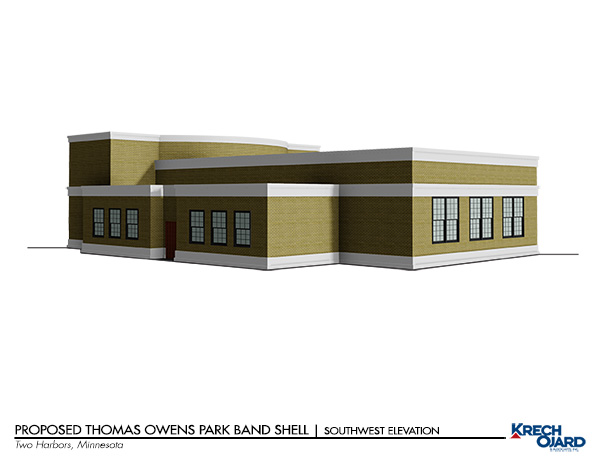 Friends of the Band Shell Park members, John Gregor and Larry Saur talked about future of the band shell on KUMD. You can listen to their interview here:

“Friends of the Band Shell Park, Inc.” (FOBSP) is pleased to announce that they have been awarded an $8,000 grant from the Northeast Minnesota Sustainable Development Partnership (NMSDP), a division of the Extension Office at the University of MN/Duluth. Grant funds will be used to assess and develop options for the band shell and surrounding area in Two Harbors’ Thomas Owens Park. The current band shell is over 70 years old.

The first phase in the planning process will be to hire an architectural/engineering firm to assess the current band shell and to develop preliminary plan options for the bandshell and park from which an artist’s rendering will be drawn. Community meetings, facilitated by staff from the NMSDP/UMD,  will be held during the planning process to ensure that the band shell and park meet the needs of the community.

On Monday, May 14, the Two Harbors City Council voted to support this planning process, which allows “Friends of the Band Shell Park, Inc.” to accept funds from NMSDP and other groups and lead the planning process.

“Friends of the Bandshell Park, Inc.”, is a 501c3 non-profit group with a nine-person board made up of members of the Two Harbors business community, City Band, and other area citizens.